DO YOU WANT TO BREW SOUR BEER? FERMO BREW ACID WILL HELP YOU BREW IT BETTER!

FERMO Brew Acid is the perfect solution for brewing exciting & distinctive sour beers, without running the risk of cross-contamination

Sour beers have a long and rich history. In fact, when beer brewing began hundreds of years ago many beers were sour, as they contained naturally occurring bacteria which gave the beverage its distinctive sour taste. Each variety is intrinsically linked to the places where these beers were born, from the Belgian Lambic and Flanders Red Ale, to the German Gose and Berliner Weisse, amongst other signature European styles.

Traditionally, these beers are brewed through the spontaneous fermentation of lactic acid bacteria, Lactobacillus and Pediococcus, and the intricate alteration by other microorganisms such as Saccharomyces and Brettanomyces. These play a specific role in creating the diverse, complex flavour profiles of sour beers.

In the last few years, sour beers have been reborn and rediscovered by both brewers and drinkers alike. Modern recipes offer a distinctive, diverse profile compared to more traditional styles, and it is thanks to these unique and varied flavours that sour beers have significantly grown in popularity.

This resurgence is linked to brewers' constant search for new twists on the most popular beer styles – those that maintain the natural acidic flavours of sour styles but with a less sharp taste. This is possible thanks to a fermentation process guided by carefully selected microorganisms (lactic bacteria and yeasts), which ultimately lead to a lower acidity level with reduced phenolic and acetic notes. 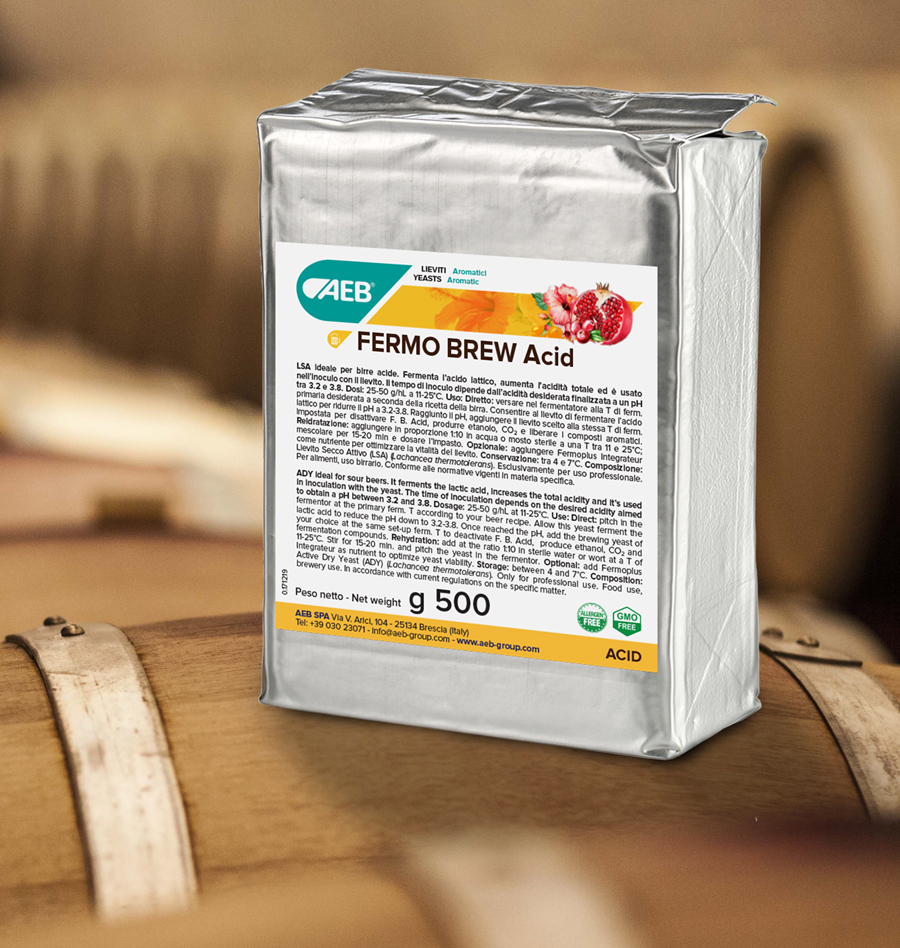 The lactic fermentation of sour beers requires a specific set of solutions. FERMO Brew Acid is a yeast that is used instead of lactic acid bacteria in the wort acidification process. It belongs to the Lachancea thermotolerans species, isolated from spontaneous fermentation by the University of Dijon. Its uniqueness lies in its ability to transform monosaccharides in the wort into alcohol and lactic acid. The result is an extremely pleasant and well-balanced beer with a rounded, refreshing acidity, (typically at a pH of 3.5 or lower), without compromising the classic fermentation aromas or a clean sensory profile.

Not only can you produce sour beers in a short period of time with FERMO Brew Acid but there are also a whole host of benefits and advantages:

Being easy to use is a key benefit of FERMO Brew Acid, as highlighted previously. After the wort production, the beer can be pitched with nutrients provided by Fermoplus Fruity or Fermoplus Fragrance if desired.

Initially, fermentation won’t be very intense, so we advise monitoring the process by measuring the pH drop. Once the pH level is higher than 0.3 from the desired pH, the second strain can be pitched to stop the acidification activity and complete the further alcoholic fermentation. For instance, if you desired a final pH of 3.5, the ideal level for the sequent pitching of brewing yeast of your choice would be at a pH of 3.8.

Other benefits by using FERMO Brew Acid is the reduction of brewing costs since there is no need for expensive acidified malt in the mash neither any addition of lactic acid to the wort kettle nor the use of mixed microflora (i.e. beer spoilage bacteria and yeasts) during the beer fermentation.

Whatever beer style is desired, FERMO Brew Acid ensures a low final pH (around 3.5), which guarantees pleasant sourness in harmony with other flavour attributes and excellent drinkability. The production of acidity and the decrease in pH are a result of the concentration of simple sugars in the wort, which are normally very low. If the aim is to achieve a lower pH, the addition of dextrose or fructose to the wort could be considered to supply more substrate, which will then be transformed into lactic acid.

FERMO Brew Acid offers brewers plenty of opportunity for customisation: from inoculation with conventional brewing yeasts (S. cerevisiae) to maturation in wooden barrels and the use of fruits or other flavouring ingredients. Its combination with various brewing yeasts allows you to brew any sour beer variants, such as American-style Sour Ales. Lactic acid bacteria are sensitive to the antiseptic properties of hops which limit the amount of hops used, resulting in potential contamination risks. FERMO Brew Acid, on the other hand, is not sensitive to the antiseptic effects of hops, leading to acidic fermentation in even heavily hop forward worts or dry-hopped beers.

Last but not least, FERMO Brew Acid can develop varied fermentative aromas and fruitiness in taste and a complex & pleasant aftertaste, which can be controlled and adapted through the fermentation temperature. At 18°C FERMO Brew Acid will evolve towards citrus notes of grapefruit, while at higher temperatures (25°C), the profile will be more orientated towards tropical fruit notes such as mango and papaya.

DISCOVER FERMO BREW ACID
Do you want to be always informed of all the news, initiatives and events of the Group? Subscribe now to our newsletter!
Subscribe the Newsletter